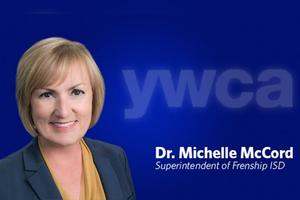 Frenship ISD Superintendent Dr. Michelle McCord is one of only nine women across Lubbock to receive this year's YWCA Women of Excellence Award.

Frenship ISD is proud to announce Superintendent Dr. Michelle McCord has been named a YWCA 2020 Woman of Excellence for her dedication, achievements and lasting impact on the community.

The YWCA of Lubbock announced McCord, along with eight other esteemed women, will be honored during a celebration and dinner on March 12th to recognize their achievements in excellence within their respective careers and professions.

With more than 20 years of education experience, McCord has proudly served Frenship ISD since 2010 and became the superintendent in 2015. Throughout her career, McCord has served on numerous boards and community-based organizations.

According to the YWCA, this award is given to women in the community who inspire others not only with their professional achievements but also with the work they do for others. By promoting women as leaders in Lubbock, the YWCA says they strive to empower women and their families in order to establish strong role models for future generations of young women.

To read more about the YWCA and the other winners of the 2020 Women of Excellence Award click here.